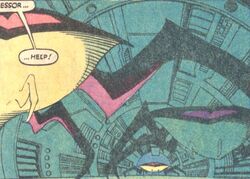 Marvel
The Sidri, also known as Sidrian Hunters, are a sapient species of six-legged arthropoidic creatures capable of combining with others of their kind into a larger gestalt form.

Their body is covered in a light carapace which is dark purple on the dorsal side and yellow on the ventral side and have a large, chevron-shaped red eye that is capable of firing a somewhat powerful eye beam which is far more useful when combined with swarming tactics.

While the forelegs are seemingly useless (although may in fact be used to feed food into their mouth), the other two sets of legs are sharply-pointed and set in a cross pattern outwards from the body. They are armored like the rest of their form. With such a braced stance, they are likely hard to knock down without anything overtly powerful.

They are linked to one another and therefore communicate through telepathy. In fact, their connection to each other is so powerful that they can in fact physically combine with other Sidri and form a larger organism, known as a gestalt. Normally this form is a giant flying creature similar in form to a manta-shaped starship-matrix. The legs are significantly shrunk in this form and the two smaller arms (which may naturally be vestigial have seemingly disappeared. This Super-Sidri bioship form physically alters all Sidri involved, binding them together into a solitary nervous system and body.

The ship is capable of FTL travel. The matrix is disruptible through the use of powerful energy or physical blows, whereupon individual Sidri affected will re-form into their original selves and separate from the matrix, generally leading to their demise as they cannot sustain the absolute cold of the vacuum of space. Complex energy hold the gestalt together, and it is still entirely capable of still firing its optic beam from its now-combined eye, and is exceptionally maneuverable for its size.

Sidri lay eggs and are particularly vulnerable to intense heat and fire. Given that they are called Sidrian Hunters, their homeworld is likely also known as Sidri.