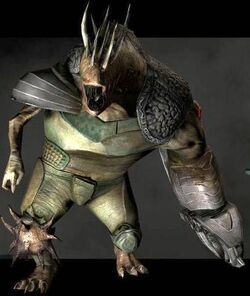 Hellgate: London Universe
Shulgoth has just recently risen through the brutal and bloodied ranks of the demonic army, sacrificing much of his body along the way. His right arm has been reduced to a vestigial appendage, serving no real purpose other than as a reminder of the cost of his servitude. His left arm, however, is the prize of his ascent. It is a massive, clawed weapon that Shulgoth uses to smash, crush and maim whatever his masters command. His worth in the Invasion was proved as he single-handedly destroyed hundreds of the British Army's largest land-based weapons, including tanks, missile launchers, and self-propelled guns. While his limited intelligence pushes him to engage in close combat, he also possesses corrosive breath if his quarry manages to escape his clutches.