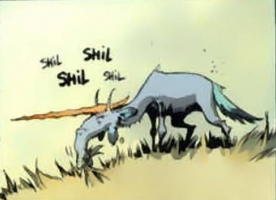 The Shul-shul is a goat-like creature with a long tusk on its head, making it resemble a unicorn. Trolls hunt the beast and it is regarded as a fast creature. One hunting tactic trolls use is to terrify it, the shock makes it unable to run in a straight line causing it to change direction. Sooner of later it is driven into the forest and eventually its tusk impales a tree trapping it.

Retrieved from "https://aliens.fandom.com/wiki/Shul-shul?oldid=146992"
Community content is available under CC-BY-SA unless otherwise noted.