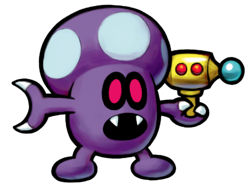 Super Mario Brothers
The Shroobs are a race of Poison Mushroom-like species from the Shroob planet. They attacked the Mushroom Kingdom when Mario and Luigi were babies. They are a purple mushroom-like species ruled by Princess Shroob and her older sister. Unlike the similar yet much more benevolent Toads, who are seemingly more human than mushroom, Shroobs seem to have retained most of their fungus ancestry.

The Shroobs forced many creatures to work and fight for them, such as Spinys, Wigglers and Bob-Ombs. The Creatures began to look like Shroobs. In addition, they are very coordinated, methodical, and ruthless, suggesting that they are very intelligent. They split their forces into different factions, and can therefore support their forces, defend their vital bases and operations, and launch offensive attacks at the same time.

After the Mario Brothers defeated the Shroob Princesses, The Koopa Troop overpowered them and took several as P.O.W.s, locking them away in cold storage.

The Shroob language as it appears in the text bubbles in the game is just a bunch of nonsensical small picture text. Only one phrase, "destroy", is repeated throughout the game. When the Shroobs talk in the game, they make gibberish sounds. However, they do sometimes use the Latin alphabet, as seen in the battle against Shrooboid Brat. When the Shrooboid Brat was about to attack, the Shroob crowd raised up signs that said either "M" or "L", signifying who to attack. The Elder Shroob Princess can also speak English. Later on, the language is shown to players using subtitles in parentheses. Whether or not this means that Mario and Luigi begin to understand the language or is just for purposes of clarification is unknown.

Shroobs use UFO's to fly them when traveling through space. These are powered by vim, the life force of Toads. The Shroobs strap the Toads to the genetically altered trees of the Toadwood Forest, which send the vim through a roots system to the Vim Factory, where it is stored and used to power their flying saucers and other weapons.

In addition, they also possess Yoob, a huge bio-mechanical weapon designed like a Yoshi. It eats regular Yoshis and converts them into eggs within a mini-factory in it's stomach, and these Yoshis are assumed to hatch into additional Yoobs to use in more assaults on the Mushroom Kingdom.

Most Shroobs carry ray guns and other weapons. Some flying saucers are equipped with ray gums of their own, while others are equipped with tractor beams to abduct Toads or even a massive laser cannon that can instantly KO the bros if it is not fended off well enough. The Shroobs have also created robot versions of themselves in the form of Shroids, which possess an arm that can transform into a laser cannon and crystals that they can trap the Bros. in. Princess Shroob also has a floating throne that can sprout legs and turn into a walker, can form a forcefield, and is equipped with two laser guns that can aim in multiple directions.

Commander Shroob
Add a photo to this gallery
Retrieved from "https://aliens.fandom.com/wiki/Shroob?oldid=186097"
Community content is available under CC-BY-SA unless otherwise noted.