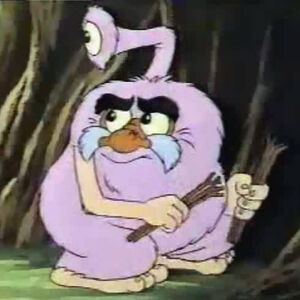 Shorter than an Ewok

Bob Carrau
Shrieks are a sapient race of short, furry bipeds from the forest moon of Endor.

Shrieks are a diminutive race; considerably shorter than Ewoks. They have four-fingered hands and three-toed feet. Their bodies are covered in light-purple fur, with the exception of their hairless arms and feet, as well as their bright-red noses, light-blue mustaches, and black eyebrows. From the top of their heads sprouts a long, flexible eyestalk containing a third eye, which moves independently from the other two.

Little is known about this species. Apparently, it is normative for them to live in communities, although some individuals opt to run away and live on their own.