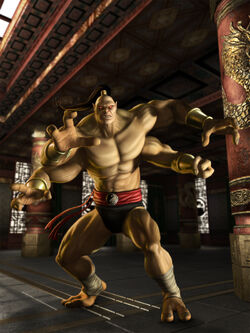 Mortal Kombat
The Shokan are a mighty race of half-Human, half-Dragon warriors that live in the subterranean kingdom of Kuatan in Outworld.

The Shokan are large creatures that dwarf Humans in size, and boast incredible strength. They are distinguished by each possessing two to four massive arms complimented by three digits on each hand. Their skin textures vary from almost resembling that of a Human's, to sporting the appearance of tiger skin.

Their civilization and society is structured under a monarchy with a king ruling their people with their heir being a prince in line for the throne. Multiple heirs to the throne must compete with one another and demonstrate their ruthlessness by fighting to the death. The victor thus becomes the ruling crown-prince who will eventually inherit the throne. Furthermore, on a single particular day, it was customary to give the King a present.

Among the Shokan, there is one rule that surpasses all others: survival of the fittest and most ruthless.

For ages, the Shokan loyally served Outworld's Emperor, Shao Kahn. One of their kind would always serve in some high capacity within Kahn's empire. They would usually face competition with the Centaurians for this role but they maintained it for generations.

One Shokan, Goro, would be chosen to serve as Outworld's champion in the Earthrealm Mortal Kombat tournaments. It was at his hands that Earthrealm's former champion, the Great Kung Lao, died.

After the Shokan Prince Goro's supposed death following Liu Kang's first Mortal Kombat victory, The Shokan Kintaro would take this role in Outworld but he too was defeated. This would be the start of their fall within Shao Kahn's eyes and their status was reduced during the invasion of Earthrealm with Motaro serving as a general, while Sheeva]served as a bodyguard for Queen Sindel.