Shoggoths are an amorphous species of shapeshifters biologically engineered by the Elder Things to act as multi- purpose beasts of burden on many planets, including Earth (which was colonized by them for most of pre-history).

Shoggoths are described as large "multicellular protoplasmic masses" or amorphous blobs, faintly luminescent and filled with gelatinous bubbles; with several eyes and temporary organs constantly forming and un-forming upon them. Almost mindless at the beginning, they were controlled through a form of hypnotic influence and could shape their appearance and essence to serve for several tasks; but regularly for construction. The Shoggoths were mostly used in the underwater cities of the Elder Things, whilst those on land preferred the domestication of Earthly beasts (such as dinosaurs).

At some point of their history, the Shoggoths started to evolve greater intelligence beyond the control of their masters, and in the early Mesozoic they started to rebel against them, resulting in a war of extermination which forced the Elder Things to kill as many Shoggoths as they could and tame the rest so that they continued to be bred and used. The Shoggoths' method of killing is often found barbaric, since it consists of tearing their opponents' heads off.

So dependent were the Elder Things on the work force provided by the Shooggoths that they could not afford to wipe them out. Throughout the years the Elder Things cities entered visible decadence, weakened by the loss of old technologies, the ever-changing climatic conditions and centuries of war against the Mi-Go; but the ever-present Shoggoths kept advancing in intellect until finally replacing their creators; the last of which had retreated to the deep oceanic abysses. The evidences suggest that the Shoggoths took over the Elder Things' cities and engaged in mimicking the culture; or at least the artworks; of their former masters. Up to nowadays at least one Shoggoth remains alive in an abandoned Elder city located on a mountain range in Antarctica.

The Shoggoths have learned to communicate by imitating their creators, and thus use the same musical bird-like language, including the fearsome call "Tekeli-li! Tekeli-li!"

They are only briefly referenced in the Necronomicon, and it is implied that even the mad Arab Abdul Alhazred was appalled by their existence

They originally appear in the novella At the Mountains of Madness by H. P. Lovecraft; though the name had been previously used by the same author. They are sometimes briefly mentioned in other stories, including The Shadow Out of Time. The Shoggoths were widely used by several other authors and continue to be featured in stories today, due to their popularity and the fact that they're in public domain

Like most of Lovecraft's creations, the Shoggoths have been differently interpreted by many artists 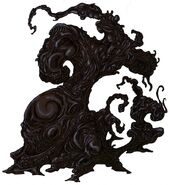 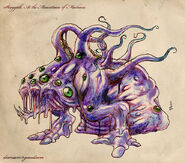 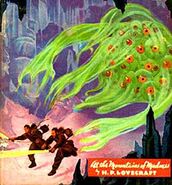 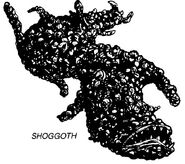 Add a photo to this gallery
Retrieved from "https://aliens.fandom.com/wiki/Shoggoth?oldid=199957"
Community content is available under CC-BY-SA unless otherwise noted.