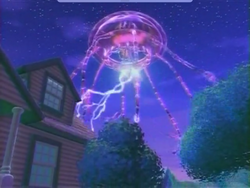 Jimmy Neutron
The Shmengian jellyfish is a large floating species of jellyfish from planet Shmengy.

They are large translucent cnidarian creatures that have a reproduction method similar to the Xenomorphs, only ending with the baby being shot out of the host's posterior through a lightning bolt, rather than bursting out of their chest.

Shmengo next to his human host, Carl Wheezer
Add a photo to this gallery

Retrieved from "https://aliens.fandom.com/wiki/Shmengian_Jellyfish?oldid=187785"
Community content is available under CC-BY-SA unless otherwise noted.