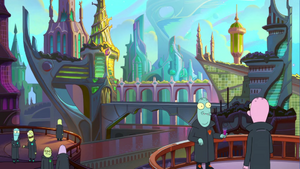 Solar Opposites
The Shlorpians are an alien species from the planet Shlorp.

Shlorpians are humanoids beings with bald scalps and noseless features. Individuals varied in skine tones from blue, pink, to green, or purple. They are mostly genderless they personality wise they can identify with male or female. The are a plant-based species that start from younger versions called replicants until they grow to become adults. The next part of their life cycle has adults becoming trees, which on rare cases if they grow being enough will serve as a home to a family of Shlorpians.

When a Shlorpian is stressed out, it beings sweating or Gooblering, small tiny little purple humanoids called Gooblers.

The planet Shlorp was destroyed when an asteroid hit the planet. However about a hundred adults and their replicants managed to escape each containing a Pupa, a creature that contains all the information and history of Shlorp. Their mission was to find a new uninhabited world and raise the Pupa which would develop and create a new home for the Shlorpians.

The Shlorpians were a highly advanced society that was considered a perfect utopia, but also totalitarian and conformist. Fashion on Shlorp mostly involved wearing black robes. While they were genderless, a pair of Shlorpans practiced a form of marriage and coupling with a person known as a lifemate.

Time travel was also possible with their technology via the Retrace-Your-Step-Alizer, that allowed a user to go back into the past. However they were only able to view the past and unable to physically interfere without a special spork stick, which required a license.

Retrieved from "https://aliens.fandom.com/wiki/Shlorpian?oldid=176359"
Community content is available under CC-BY-SA unless otherwise noted.