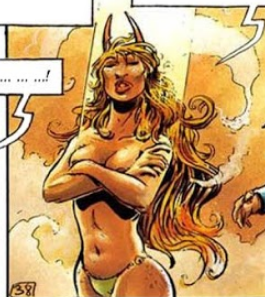 Shlikah is the Darshan Goddess of Pleasure.

Shlikah is one of the many deities Created from the collective belief of the people of Darshan on the planet Troy. Three years ago to the start of Lanfeust of Troy, Shlikah cursed Sheba the favorite concubine of the Shah, sovereign of Darshan as he provided Sheba no pleasure from when he impregnated her. Sheba was with child for three years however the Darshan court had assumed it was Xulody’s doing.

A friend of Sphax she learned of Lanfeust of Glinn, a boy touched by the Magohamoth. Shlikah also learned of Hebus, an enchanted troll from Eckmül. Interested in trolls from the other side of the world, especially one outside of Swoog’s control, the goddess set of to find the troll. Hebus who was separated from his friends by Swoog’s servants was brought to the Palace of the Gods. The two became lovers during the three days the troll waited at the palace to be reunited with his friends. C'ian after learning from Xulody that it was Shlikah was preventing the birth of the Shah’s son, beseeched the goddess to undo the curse as it would cause Sheba unnecessary pain. Shlikah not willing to be cruel, allowed her curse to end after she was convinced by Hebus in bed.

Shlikah sadly separated from Hebus, who continued on Lanfeust journey to seek the source of all magic on Troy. The goddess would later reunite with her troll lover in Eckmül, part of the Darshan delegation to celebrate C'ian’s marriage to Baron Gold Azure.

Retrieved from "https://aliens.fandom.com/wiki/Shlikah?oldid=137587"
Community content is available under CC-BY-SA unless otherwise noted.