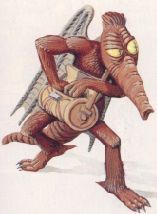 The Shingouz are a spacefaring species widely known as the best spies and information smugglers of the galaxy. They pride themselves in that; although they seldom care about work ethics; they will never lie to a client.

The Shingouz are short, brown-colored bipeds with non-functional leathery wings, a muscular tail, a tubular proboscis and yellow eyes. Their homeworld is a desolated wasteland with perpetually rainy weather and virtually no resources. They require the same environmental conditions as Humans. They are also known as great appreciators of alcoholic beverages, to the point that they have three stomachs - each specialized for digesting different categories of drinks. This is because their homeworld possesses natural bodies of glingue, an alcoholic substance, which often constitutes the single source of nourishment available to the natives.

The Shingouz live and travel in groups of three or multiples of three; with marriages occurring between a trio of males and a trio of females. They also invariably give birth to triplets.

Retrieved from "https://aliens.fandom.com/wiki/Shingouz?oldid=187243"
Community content is available under CC-BY-SA unless otherwise noted.