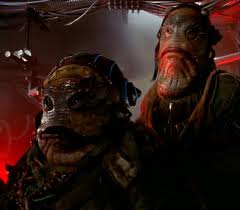 Farscape Universe
The Sheyang are a technologically advanced race of sapient, bipedal salvagers.

Sheyang are humanoid and of a stocky build, though no taller than most other humanoids e.g. : Sebacean, they are considerably heavier weighing in at roughly 100KG or higher as an average and possess great strength.

Because of their heavy build the Sheyang appear toad-like; this teamed with clammy skin makes them look amphibian although they have probably taken a more reptilian-analogous evolutionary path.

They possess an unusual ability to spit fire, this is done by something called the Kalack gland that gathers materials (particularly toxic ones) from around the body to form a bile that egnites when exposed to oxygen.

Many Sheyang that have been encountered were scavengers (it has been suggested that this is common practice for the species), hunting for valuable materials and parts from wrecked vessels.

They will aggressively claim a salvage if they believe they have a fighting chance, though if a foe is strong they will not directly attack, unless they perceive this strength to be a ruse.