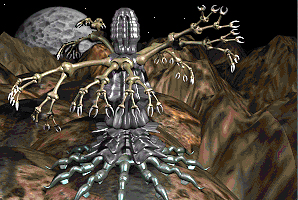 Little is known of the Shevar. They are sorcerers, masters of dark forces from another universe. They are an inorganic life form — they follow most definitions of life but are composed entirely of inorganic substances. They are able to harness an anti-energy that draws in and consumes energy and life force.

It is believed that the Shevar came from another universe with different physical laws. They experimented with their arcane arts until they opened a way into this universe, and the pathway they opened led to a planet teeming with life. This was an unimagined bounty to the Shevar and many of them came across to settle the world they found. They utterly devastated this world, destroying all other life on the planet by feeding on its life force.

They aren't purposely hostile or evil, but their values are incomprehensible and they do not recognize the creatures of this universe as living beings.

Know, O Sorcerer, that this world the Shevar found so long ago is not unique in this universe. The points of light in the sky are huge balls of super-heated plasma and around many of them are worlds such as this one.
The Shevar follow your will. They must build arcane engines with which they can find these other worlds. This universe teems with energy-food, ready for the Shevar to absorb.

Energy Sappers: The Shevar are power-sappers. You can wipe out the power of all alien ships in systems you occupy.

Retrieved from "https://aliens.fandom.com/wiki/Shevar?oldid=160971"
Community content is available under CC-BY-SA unless otherwise noted.