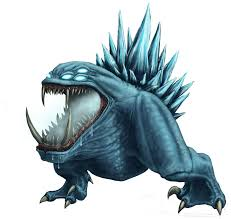 Metroid Universe
Sheegoths are predators that live in the icy terrain of the Phendrana Drifts, a region on Tallon IV. They use ice-based attacks against their prey like snowballs and icy breath. They also have long fangs, and they like to freeze their prey before eating it. They tend to nap and wait until their prey comes in their area. Also they can't swim (I mention this because there is icy water in their terrain).

As the name insists it is a young Sheegoth. Young Sheegoths are fast, and tend to attack their prey and players with snowballs. Once close to their prey they attempt to freeze them with their icy breath. Once the prey is frozen they start to eat the prey. On their back is a thick layer of ice which protects their weak point, their nervous system.

As their name insists these are Adult Sheegoths. The Adults are much slower than their younger kin. But their back bears a large crystal that can absorb energy from the players beams (except the Plasma Beam which all Sheegoths are vunerable)for the Sheegoth to convert into usable energy for their ice attacks. There stamina is small in supply as one use of their Ice Breath will significantly tire them out for a short time.

In Metroid Prime 2: Echoes, on the planet Aether there is a very similar creature, called the Grenchler. Grenchlers live in swamps and they shoot lightning from their horns. Plus they are amphibious and are excellent swimmers.