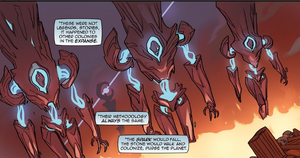 The Shard have been known amongst the human worlds in the Lightstep Chronicles. They colonize other worlds with the same methodology, sending members of their species to a world, laying dormant until a Lighthouse was sent from their worlds to rouse their colonists from slumber and purge the planet.

The Singularity Priests believe them to part of some cycle that reboots the universe. They see their rise as inevitable and formed a religious cult around these gargantuan giants.

The Shard are mineral life-forms from planets orbiting pulsars. Outside gamma radiation saturated environments they remain dormant. In order to colonize other planets they send in vanguards centuries ahead of a device called a Lighthouse, a stone monolith, that generates gamma radiation.

Retrieved from "https://aliens.fandom.com/wiki/Shard_(Lightstep_Chronicles)?oldid=138588"
Community content is available under CC-BY-SA unless otherwise noted.