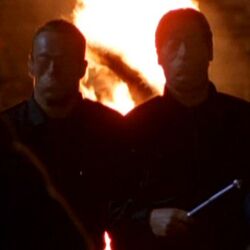 A pair of Faceless Rebels.

The X-Files
The Shapeshifters are extraterrestrial beings known for their bright green blood, extreme physical resilience and the ability to perfectly mimic the appearance of other humanoids. Their relationship with the Reticulan Colonists is unclear, although it appears that they have been conquered and at least partially assimilated by the Colonist's empire.

At least two factions of Shapeshifters are known to exist: the ruthless bounty hunters, which are loyal to the Colonists; and the Faceless Rebels; so-called for their practice of sealing up all orifices of their faces to prevent themselves from being infected by the Purity. The Faceless aliens oppose the actions of the Colonists, and have been openly at war against them. Still, there is evidence to suggest that the Colonists and the Shapeshifters might be closely-related, or even different factions within the same species, even if that remains inconclusive.

Their genetic material has also been used on Earth by the Syndicate in the creation of alien-Human hybrids, which often display many biological traits in common with the Shapeshifters.

A Shapeshifter's blood is bright green and remains unchanged independent of the external form they assume; thus providing a way of identifying them. This blood is usually highly toxic to Humans; but the toxicity has only been observed in the blood of the bounty hunters, and not that of the Faceless Rebels. Since the only known difference between the two is that the bounty hunters are infected with the Purity, it's likely that the Purity is the actual source of the toxicity. Like the Colonists, their physiology is negatively affected by cold temperatures, which slow down the effects of their blood toxins.

Shapeshifters are able to somewhat alter their size as well as their shape, at least to some extent, as shown when they're able to impersonate children and adults alike. They are immune to most illnesses and extremely resistant to physical injuries, including gunshots. In at least some cases, their regenerative abilities extend to being able to heal other life forms from disease or injury as well.

Due to their nigh-invulnerability, there are only two known ways of killing them. The most effective one is to use a special gimlet weapon made of an unknown metal to perforate the base of the neck. This weapon is typically used by the bounty hunters themselves to hunt out rebels, dissidents, unwanted hybrids and others. At death, their bodies dissolve into a puddle of green fluids. The other known way is to incinerate them.

The true form of the Shapeshifters is not known; and it is possible that what they regard as their true form is more of a social construct of identity. In an incident related by Arthur Dales, a rogue Shapeshifter decided to live on Earth and adopted a Human identity as Josh Exley. When he was tracked down by a Shapeshifter bounty hunter, the bounty hunter shifted into what he claimed was his real form: a form identical to that of the Colonists. When he demanded that Exley do the same, however, Exley remained unchanged, implying that the Human form had become his real form to him. To illustrate the extent to which he rejected his original biological identity, Exley's blood was later shown to have become red and harmless, like Human blood, rather than green and toxic as expected from his original species.

Retrieved from "https://aliens.fandom.com/wiki/Shapeshifter_(The_X-Files)?oldid=188608"
Community content is available under CC-BY-SA unless otherwise noted.