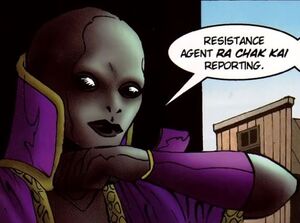 Cowboys & Aliens
An unnamed species of shapeshifters figure among the many sapient races that have been conquered and subjugated by the Caste.

They're humanoid shapeshifters and their natural appearance is similar to the Greys. Their abilities allow them to regenerate from wounds that would be otherwise fatal.

While some members of this species serve the Caste as slaves, others have formed an armed resistance that seeks to ally themselves with other species and fight against their oppressors.