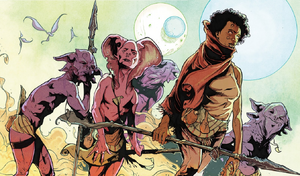 Shannon Kind is a woman who discovered herself on an alien world and possesses the ability to move forward into the future and the main protagonist of the Zojaqan Comic Series. To the Zoja she is regarded as Shan, a goddess that protects their race.

Shannon grew up in Dallas but later moved to Chicago. She was raised by her father, and occasionally got into fights on the street. Shannon eventually married, however her spouse died and she was left alone as a widow to raise her only son, Luther, working as a US Postal Service carrier.

She tragically lost Luther in a car accident, which affect her deeply. A year her her son's death, Shannon found her self falling into the sea of an alien world. Making her was unto land she realized she wasn't on earth to the primordial setting and celestial bodies orbiting the planet.

Shannon finds that the world is barren and filled with fire to which she nearly suffocates, but upon awakening she finds herself in the same place, yet it appears that time has moved forward for her. The barren wasteland now had become a vibrant jungle. She realizes through the course of her time on the planet, that she has become unstuck in time, always vanishing and then reappearing in an unknown future.

While surviving and understanding her ability, she comes across the Zoja, a primitive race native to the planet she makes her home. 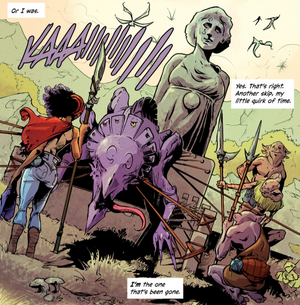 After saving the pair from a lethal predator, Shannon vows to protect Zoja before the timestream takes her away. She encounters the Zoja once more now having progressed to the level of a primitive tribe. During her brief stays with the Zoja she teaches them on how to survive their harsh world.

Unfortunately her ability prevents her from fully be synchronizing with current time, and thus is propelled into the future at an undetermined time. What she see is children convoluted her teachings to subjugate the weak. She initially uses violence to correct their ways, punishing those in power and reminding them of their responsibilities. Centuries later Shannon learns of the Brutal Tide, descended from a prehistoric alpha predator she encountered when she firts came to Zojaqan. Seeing them a threat to her Zoja, Shannon sets to wipe them out. Thanks to her ability which she mastered, she uses it to slow time to easily dispatch her foes, setting traps to kill scores of their kind. However to her horror she learns of the Ageless Tree Entity, a creature as timeless as she, who unlike her power is attributed to the blood spilled by the Brutal Tide, which fertilizes the trees. Learning that her kills were allow this entity to grow stronger, she made a truce with the Entity allowing it to rule the Brutal Horde, on the condition it left the Zoja alone.

Despite being a middle age woman, Shannon is quite athletic being a former track runner. In the new world which she finds herself she uses her skills to survive, being proficient in using a spear and hunting. Another ability that she possess is the ability to move forward in time. However this ability appears to be something that she cannot consciously control.

Over time however Shannon managed to develop control over her ability, allowing her to slow time or go forwards.

Retrieved from "https://aliens.fandom.com/wiki/Shannon_Kind?oldid=164644"
Community content is available under CC-BY-SA unless otherwise noted.