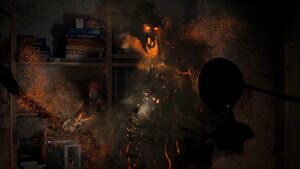 Turn into shadows, infiltrate shadows of others to become linked to their victims, travel through rifts in the fabric of reality

The Shadow Kin are a race of humanoid, interdimensional beings that can turn into shadows.

The Shadow Kin are humanoid in appearance, their skin appears as ash-like with a fiery yellow/orange light shining from between the cracks. When they turn into shadows, they either resemble a normal shadow or a three dimensional shadow of itself with the yellow/orange light shining from where their cracks would be. They cannot survive physically without the presence of shadows.

The Shadow Kin have the innate ability to become or enter into other people's shadows. When they do this, they become linked to the caster of said shadow, to where when the shadow kin dies, so does it, but when the caster dies, the shadow kin stays alive. This is one of two ways to kill a shadow kin where the other method is to keep them in an environment with no shadows present, i.e. extremely bright light. They use these abilities to commit mass genocide of various races by having a shadow kin infect the shadow of every living creature on a planet (without them knowing), then have each shadow kin kill them at the exact same time. They also have the ability to create tears in the fabric of reality at will, which is how they jump from our reality to their home planet that exists outside of the universe.

The reason for the Shadow Kin's genocidal acts is because of their world's isolation from the universe (it is unknown if the Underneath existed in our universe before and fell out of our reality or it was created in the void). The Shadow Kin felt envious of how their world and race was looked down upon by our universe.

Retrieved from "https://aliens.fandom.com/wiki/Shadow_Kin?oldid=180203"
Community content is available under CC-BY-SA unless otherwise noted.