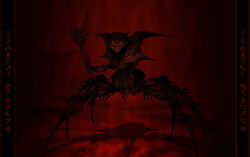 Babylon 5
The Shadows are a species of alien from the planet Z'ha'dum.

The Shadows are insectoid hexapeds that resemble a cross between an Earth spider and praying mantis with a small triangular head and seven pairs of pinpoint eyes in two stacked rows (3 above, 4 below.) Externally, they're colored in shades of dark purple and black and posses the ability to cloak themselves from most visible wavelengths. They can however sometimes be seen as figures of static in the upper end of the infrared spectrum. Shadows, like Vorlons, have evolved into beings of light, but unlike them prefer to assume material form.

Shadow speech sounds like a dynamic screeching that can be understood by their thralls, such as Morden, Anna Sheridan and Justin, through an implant

By the twenty-third century, Z'ha'dum was a blasted, charred wasteland. Its surface was marred by the many attacks that drove the Shadows away from the planet eon after eon. When they returned at the Dawning of the Third Age, their cities were kept mostly underground.

It is unknown if Z'ha'dum was the homeworld of the Shadows as a species, but for most of their long history they considered it their home. This was due to the presence of Lorien, one of the First Ones, who lived in a deep chasm on the planet for over one million years.

The last time the Shadows would be driven from the planet would be at the end of the First Shadow War, in roughly the thirteenth century A.D."shadow" Some of their race managed to remain, but were in a state of hibernation. One thousand years later, during the Babylon Project's early days, the Shadows returned. They slowly rebuilt their great cities. They also began to recall some of the ships that they had hidden throughout the galaxy after the War.

One of their ships had been hidden on Mars. When Earthforce crews uncovered it, they reactivated an ancient beacon."message" Days later, the Shadows sent a second ship to retrieve the first one. The Psi Corps, however, had managed to plant a homing beacon inside. In 2257, Interplanetary Expeditions was commissioned to send a ship (the Icarus to Z'ha'dum on an exploratory mission--most of the crew was apparently unaware they were being used, that the planet was where the Shadow vessels had been tracked to. When the Icarus arrived on Z'ha'dum, they found it seemingly deserted. They quickly awoke some of the Shadows, however, and those members of the crew who would not serve willingly were said to have been killed."shadow" However, Morden, Anna Sheridan, and Justin were enslaved by the Shadows. Z'ha'dum (episode) It is possible that the other crew members were simply integrated into various Shadow vessels to fight in the upcoming war.

Once the shadows had been defeated and left for beyond the rim, the White Star went to investigate Z'ha'dum, only to see a mysterious fleet (almost certainly the Drakh) leaving Z'ha'dum moments before the entire planet exploded.

Retrieved from "https://aliens.fandom.com/wiki/Shadow_(Babylon_5)?oldid=195073"
Community content is available under CC-BY-SA unless otherwise noted.