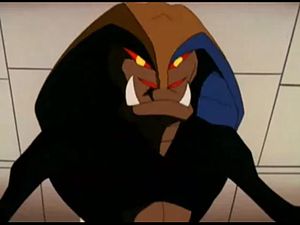 Roswell Conspiracies
The Shadoen are highly advanced hostile species that devote themselves to the enslavement and/or destruction of other races. They attempted to conquer Earth during the 15th century but their fleet was repulsed by a long range weapon sent to Earth by the Titani.

Shadoen are large crustaceanoids, they have four eyes, mouths filled with sharp teeth, and tusks growing from their lower jaws. Their protective hood-like shells (much like a cobra) goes from the back of the head to the upper back. Two large pincers which are used for grasping objects or while lower arms are smaller. For locotion they have four legs.

Contrary to races such as the Lycanthropes - who have an innate mimetic system - or the Vampires - who use holographic technology - the Shadoen are not shapeshifters. In order to acquire the target race appearance, the Shadoen imprint their DNA and memories on a human clone, in so becoming an exact replica of the victim. After the assimilation, the Shadoen cannot freely morph to its former original shape, having to maintain the target guise or forfeit it by triggering a Shadoen DNA bomb. Once activated, the DNA bomb restores the agent to its full fledged Shadoen form, permanently destroying the previous target guise in the process. This ability has permitted the Shadoen to successfully infiltrate human race. They also possess a mild ability of regeneration, and their blood has a poisonous effect if ingested; for example in Mexico, a Vampire mistook one of the Shadoen Agents as a human and intended to enslave the individual once draining most of his blood. Another fact is that the Shadoen Multitude has an aversion to oxygen, which is one of the reasons why they intend to level the Earth's forests. Their second invasion is thwarted by the efforts of the new alien-human Alliance.

The previous invasion took place in the 15th century but were defeated by the Titani who protected the Humans.

In 1946 after the second World War near Roswell a Shadoen Agent named Wraith killed and absorbed the organic tissue from the real James Rinaker and helped stage the Roswell Incident. He would later become leader of the Global Alliance after capturing Walter Logan and put him in stasis for a number of years so he can carry out his plot to further divide and weaken the factions on Earth before the Shadoen Multitude's second arrival, in attempt to avoid making the same mistake as they did centuries ago.

Retrieved from "https://aliens.fandom.com/wiki/Shadoen_(Roswell_Conspiracies)?oldid=182773"
Community content is available under CC-BY-SA unless otherwise noted.