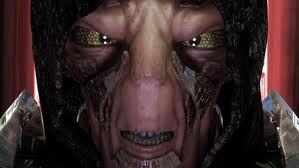 Supreme Commander
The Seraphim are an extradimensional race, who were allowed into the normal universe after the detonation of a device known as the "Black Sun" by one of three human factions (UEF, Cybran, or Aeon Illuminate)

On a remote colony world, the forerunners of a theocratic matriarchy known as the Aeon Illuminate, made first contact with the Seraphim, where they learned about a revolutionary new religion known as "the Way" from the first inhabitants, who they named after the planet, as they could not pronounce the true name of the aliens. At the time, the UEF (United Earth Federation) was extremely Xenophobic, destroying whatever alien life they encountered. When they learned about the Seraphim, they decided to destroy them too. They forbade any contact, and killed them when they could.

The chief biologist, curious about the Way, still made regular trips to visit them. The UEF army soon followed her, and finally eradicated them. This caused the UEF to raise the ire of the Seraphim's government in the Quantum Realm. After an age of conflict between the Aeon, the UEF, and a race of cyborg slaves called the Cybrans, the Black Sun device, an exceptionally powerful weapon, was fired, weakening the fabric of reality. The Seraphim soon poured through the rift, murdering UEF, Cybran, and Aeon alike. The Seraphim soon learned the location of Earth from a Cybran traitor, and prepared to lay siege. They were (thankfully) defeated and driven back to the Quantum realm. The Aeon and Cybran were given full citizenship into the UEF in return for their assistance.

The Seraphim religion is known as "the Way". It involves high empathy or extreme telepathy, so they cannot harm another being as they themselves will suffer. For this reason, they use robotic soldiers, and their organic commanders are severed from the Way. Unfortunately, this causes them to lose their "soul" as well, effectively damning them.