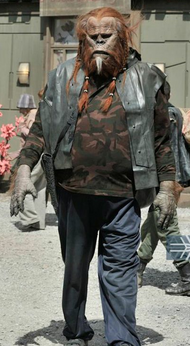 Defiance
The Sensoth are a member race of the Votan who originated from the planet Irath.

Larger and taller than humans, they basically resemble a more humanoid ape or sloth. They have an excess of reddish-brown fur, except on their faces, which have grayish skin. Their jaws protrude further forward than on humans, like apes. It is important to note, that they are the longest-lived of all of the Votan races, often living as long as two centuries.

Due to their strength, they are often used as heavy laborers by the other races, though their sinister appearance can often veil a kind soul. Sensoths range from well-muscled to portly, but are always imposing.

They prefer to live at a much slower pace than others, speaking and acting slowly due in part to their long lives. Sensoth have hair called Nibray locks which they grow at a young age.

Like the Liberata and Gulanee, they are not one of the more powerful Votan races. On earth it seems this race gets along reasonably with all of the other races, they are even found amongst raider groups.

They are always planning, their long lives and meticulous attention to detail have made them an extremely patient people, they tend to move, speak and act slowly. They are not without humor, but their practical jokes are always designed to unfold over time.

Not much is known about the sensoth religion, but apparently the Liberata have borrowed from it to a certain extent.

Sensoths hail from of region of planet Irath known as the Great Tarnalin Forest. Slowly but surely, they established trade relations with the outside world. Eventually, Castithan raiding parties invaded their forest, taking many Sensoths back to their own homeworld to act as servants and soldiers in the Castithan army. To this day, many Sensoths can be found in the employ of wealthy Castithan families… a long, dark history from which the Sensoths have not been able to escape. Still, in later centuries, Sensoths began to view their employers (Castithan or not) as family, and protected them with equal passion.

Retrieved from "https://aliens.fandom.com/wiki/Sensoth?oldid=198792"
Community content is available under CC-BY-SA unless otherwise noted.