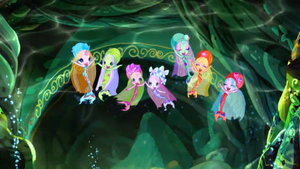 The Selkies are small mermaid-like magical creatures. Like pixies, they are able to bond with fairies.

The Selkies of the Oceans are miniature wingless mermaids with brightly colored skin. They could be closely related to the Undines.

They wear hats that are brightly colored like them and which have decorations and a kind of veil on the back. Only Gate keepers of all realms and Guardian Selkies of the Pillars have a veil in their hat. Normal Selkies have normal hair strands. Male Selkies have their torso uncovered by scales. They are colored like the respective planets which they guard.

Ordinary Selkies have some similarities with the keepers:

There are often many round creatures looking like baby fish that accompany them which turn onto brightly colored fish on coming in contact with magic or other fish. They are called bollabies.

The Selkies were present during the crowning of Nereus, when Lemmy was holding the crown that King Neptune would place on Nereus' head.

After an oil spill occurred on Earth near Gardenia, oil from the spill traveled through the sea and reached the underwater portal linking the ocean of Earth to that of Andros. Phylla alerted by a Triton guarding vain and sealed the Earth portal after crossing it into Andros with the Triton guard.

There she and Lemmy saw Tritannus being mutated into a monster after absorbing the pollution and breaking free from the prison of Andros along with the Trix. With the help of the Trix and of the triton guards that he turned into monsters loyal to him, Tritannus stole the powers of the two gatekeepers. He then vowed to hunt down every Selkie and to steal all their powers, so that he would be able to enter the Infinite Ocean and from there conquer the whole Magic Dimension.

Six of eight known Selkies bonded with the Winx Club. Eventually Tritannus absorbed the powers of all the Selkies that guard an ocean portal, granting him access to the Infinite Ocean.

Selkies are also present in the Infinite Ocean, where there are Guardian Selkies who protect the Pillar of Light.

Retrieved from "https://aliens.fandom.com/wiki/Selkie?oldid=182905"
Community content is available under CC-BY-SA unless otherwise noted.