Alien Species
Register
Don't have an account?
Sign In
Advertisement
in: Sapient Species, Insectoid Species, First Men in the Moon Universe,
and 12 more 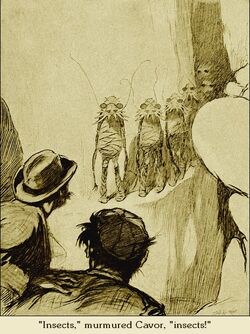 The First Men in the Moon

H. G. Wells
The Selenites are the sapient insectoid inhabitants of the Earth's moon.

Selenites physically resemble quasi-humanoid ants, about five feet tall (~ 1.52 meters), with a light physical constitution enclosed in an exoskeleton from which slender jointed limbs and whip-like tentacles protrude. The large head contains a couple of widely separated insectile eyes, a downward beak-like mouth and no visible nose or ears. Their necks are also jointed, and they have ridges of spikes running down the back of their heads and over their eyes.

Due to the lower gravity of the moon, the Selenite body is very weak and flimsy, and can be easily destroyed by Human strength. They are omnivorous, their diet including mooncalves and fungi. Their eyes are sensitive to sunlight, but are able to perceive heat.

Like many insectoids, the Selenites are divided in multiple castes which differ widely both in appearance and social functions. There are male and female Selenites, in addition to dozens (perhaps hundreds) of different sexless forms which act as soldiers, artists or laborers of many specialties. All sorts of wild physical divergences are visible among the countless Selenite varieties: oversized antennae, long skeletal limbs, inflated heads, diminutive heads and bloated bodies, etc. This extreme variety of phenotypes allows each individual to be physically tailored to perform a specific task.

The interior of Luna is entirely perforated by Selenite-made cities and passageways. The underground water channels are navigated, and light is provided by an extremely common variety of bioluminescent plankton. The Selenites living in the deepest communities develop bioluminescence themselves, probably a result of consumption of the aforementioned plankton.

Selenites typically wear elaborate clothing, including helmet and glasses when adventuring out of their subterranean cities and onto the lunar surface.

Their language consists of sounds and gestures, although the former are inimitable by Humans and the latter are highly different from those used on Earth. However at least some Selenite castes are able to learn Human speech and properly communicate with them.

Cavor describes the Selenites as a very sophisticated species, far above Humans in matters of intelligence, morality and social structure. They are a unified civilization across their globe, governed by a single monarch which is referred to as the Grand Lunar.

Prior to first contact, Selenites tended to regard the Earth as a dead world, much like mankind regarded the moon; due to the Earth's density and comparative lack of vast subterranean refuges where the natives might be able to hide from the elements.

First contact between Humans and Selenites occurred in 1901, when Professor Cavor and Mr. Bedford traveled to the moon in an artificial sphere powered by cavorite: a material impervious to the pull of gravity.

Their first interactions with the lunar natives resulted in hostilities, as the explorers were captured and, unable to communicate and believing the insectoids to be hostile, offered resistance to their captors and inadvertently killed them with ease, due to the Selenites' naturally fragile physique.

Afterwards, the Earth explorers got separated while searching for the sphere, and each was led to believe that the other had died. While Bedford managed to find the spaceship and return to Earth, Cavor was found by the Selenites once again and, finding them to be a peaceful and advanced society, ended up living among them for the next months before establishing radio communication with Bedford back on Earth. 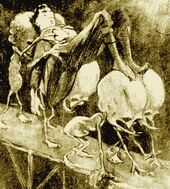 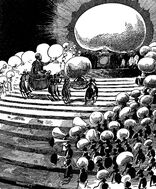 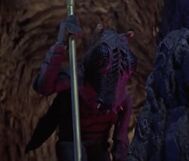