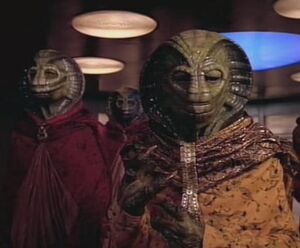 Andrew Probert
The Selay are a reptilianoid-humanoid species and one of the three sapient, spacefaring races native to the Beta Renner system, the others being the Anticans and the non-corporeal entities of the Beta Renner Cloud.

The Selay have scaly skin and make sibilant noises in their speech. Their hands have three clawed digits.

Ever since making contact with each other, the Anticans and the Selay have been mortal enemies, with the Anticans finding the taste of Selay flesh delightful and the Selay responding by attempting to capture and subdue their predators even during diplomatic occasions. Both species applied for Federation membership at the same time, in 2364. According to Captain Jean-Luc Picard, both Anticans and Selay have a passionate hatred over "matters of custom, God concepts, even, strangely enough, economic systems". Both also have been in contact with the Ferengi.

Retrieved from "https://aliens.fandom.com/wiki/Selay?oldid=169624"
Community content is available under CC-BY-SA unless otherwise noted.