Segmentasapiens are organosilicon-based life forms with segmented hardened quasi-organic polymer skin that come in a variety of colors, usually three per individual, and are decorated with black lines. Their bodies are made up of individual blocks that they can rearrange at will.[2]

A Segmentasapien's humanoid appearance looks similar to that of a gorilla made out of building blocks with extremely large fists and curved stub-like feet. Whenever they walk, they can either bring their feet up and put it in front of them on the ground or walk with their arms in front and legs in the back almost like a Human.

Segmentasapiens eat a mixture of organic and inorganic foods.[2]

Segmentasapiens can generate and form more blocks on their bodies at will,[2] allowing them alter their size or transform into different objects including walls, catapults, domes, and cages.

If a Segmentasapien's body is damaged, they can easily reform the broken pieces, allowing them to survive explosions and bisections.

Segmentasapiens can willingly detach parts of their bodies to get out of certain situations. They can also generate handcuffs strong enough to restrain humans and defeated Celestialsapiens out of their blocks.

Due to the nature of their building blocks, Segmentasapiens are very dense and durable. Even if it is just pieces of themselves, they can inflict painful on a Kaosseffexx Ultimasauria when stepped on.

Segmentasapiens can turn their arms into guns (dubbed "Bloxx-lobbers") that fire pieces of themselves like projectiles. Similarly, they can detach and shoot their fists at enemies.

Because they are made of building blocks, Segmentasapiens can survive in the vacuum of space.

Segmentasapiens are immune to high amounts of radiation, such as when reentering a planet's atmosphere.

While Segmentasapiens are highly durable, they can still feel pain from being beaten down by an Evolved Vaxasaurian and having boulders rain down on them.

Segmentasapiens are vulnerable to acidic substances, such as the saliva of a Screegit and hydrogen chloride gases generated by Gutrot's Species.

Ectonurites and other beings capable of becoming intangible can easily phase through a Segmentasapien if they are trapped in its dome form.

Segmentasapiens can be lifted, carried, and/or thrown by a species with as much strength as a Thep Khufan or a Pturbosaurian.

There is a limit to a Segmentasapien's radiation immunity, as plummeting through Earth's atmosphere can make them feel like "[their] butt is on fire".

Segmentasapiens can be easily overpowered by a Galilean's gravity powers.

Like other organic beings, Segmentasapiens can be erased from existence by a Chronosapien Time Bomb.

Despite their combat skills, Segmentasapiens can easily be defeated by a Revonnahgander with the same power level as Kundo.

While the details are currently unknown, there is probably a limit to how big a Segmentasapien can become.[3]

Segmentasapiens are one of the oldest lifeforms in the universe and are able to rearrange their matter at the sub-atomic level to create a vast variety of shapes and forms. They evolved this way in response to invasions of their homeworld Polyominus by warring alien species.[1]

To avoid detection by so many violent interlopers, Segmentasapiens began to transform themselves into the very architecture of their planet. In this way, they could remain hidden in plain sight as army after army over the centuries marched through or even occupied their eerily abandoned, medieval-style walled cities, finding not a single living creature—because the living creatures are the cities. Segmentasapiens are in fact so rarely seen in their true form that many consider them to be only a myth.[1] 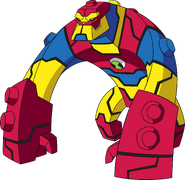 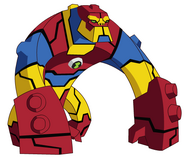 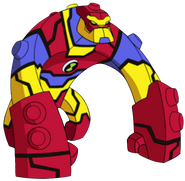 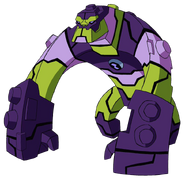