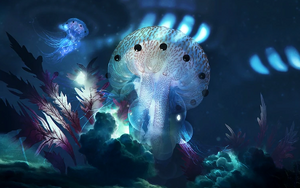 The Sefaloros are a race of aquatic industrialists.

The Sefaloros are giant jellyfish.

The Sefaloros developed in an environment of metal-rich seawater. At an early age into tool-users, they became the dominant species in their environment.

As the Sefaloros developed they began to use other sea creatures as tools since manipulating metals wass not easily done underwater. Since then they are formidable builders and industrialists.

Retrieved from "https://aliens.fandom.com/wiki/Sefaloros?oldid=172758"
Community content is available under CC-BY-SA unless otherwise noted.