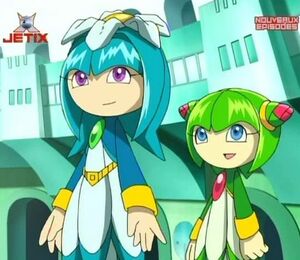 Seedrians is a name used for a species of plant-like aliens who have evolved to assume sapience and a humanoid form.

Male Seedrians; referred to by some as Thorndrigans; are slightly larger than most of the inhabitants of Sonic's world, and are usually rather round, with short tails, small antler-like growths on their heads, and a colored ridge on the top of their heads; they are largely similar to trees in their make-up. Female Seedrians, or Petali, more closely resemble their plant ancestors, being mostly slender and having an arrangement of petals sprouting from their waists and buds — or bloomed flowers — atop their heads.

Retrieved from "https://aliens.fandom.com/wiki/Seedrian?oldid=158050"
Community content is available under CC-BY-SA unless otherwise noted.