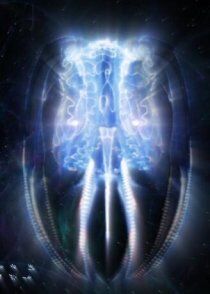 Unknown, but they require Tiberium to survive.

Command & Conquer
Little is known about the Scrin, save that they have ichoriforming capabilities, a dependence on Tiberium, and bioengineering capabilities.

There are two main sects; Reaper and Traveler, with an unknown number of sub-cults for each, but at least 17 and 59, respectively.

Reaper sect is a quasi-military organization, with cult 17 being the most violent and dangerous. This sect worships a being known as The Reaper, a god of war. They often absorb a large amount of liquid tiberium to augment their muscle mass and make them even more dangerous. They focus on heavy hitters and slow movers.

Traveler sect makes heavy use of genetic engineering and mind-control. A quantity of the 59th cult was stranded on Earth during the original Scrin invasions. They focus on hit and run, as well as the aforementioned psionic abilities.

Scrin military is more of a mining operation, with their army (and sometimes Reaper and Traveler sect, if drastic measures are needed) there to protect their harvesters from any surviving natives and tiberium fauna.

Weapons are often particle beam or plasma based. Some can be enhanced by tiberium.