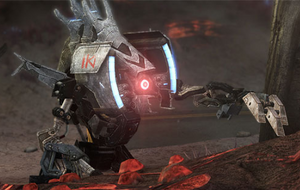 The Scrappers are built from scrap metal and salvaged technology and they have partial sentience. Scrappers contain a data core which contain data from the Arks. They possess a capacitor which when in contact with ark debris will become altered but become more durable. The Scrappers have patchwork weapon systems on their bodies which are quite vulnerable.

Scrappers perform numerous rudimentary tasks such as salving scrap metal, collecting components or securing an area for salvage. Scrappers also have a primary directive of replication.

In the Arkfall many of the Ark-Brains in the ships in orbit were destroyed however at least one of them survived the destruction. THe Ark-Brain was damaged in some way and began to take control of technology on Earth. In less than six months the Scrappers had been constructed. In France an army of Scrappers arose, building more of themselves from technology salvaged from under the ice. These Scrappers followed all of the commands of the Ark-Brain and kept the local populations alive to be used as a slave labor force. In San Francisco a series of minor arkfalls showered the ruins with tachyon magnetic particles and led to the rise of more Scrappers who took over several areas including building a construction facility at Bathhouse. (World of 2047: Technology, Adjusting to Life on New Earth, World of 2047: 2047 Map, Pursuit:San Francisco Exploration III, Loading screen, Side Mission:Scrap the Whole Thing)

In 2046 an arkfall containing a Progenitor Core crashed at the Scrapworks Salvage Yard and when it was activated caused more Scrappers to be formed, luckily they were destroyed but the core burnt out. Cass Ducar and an ark hunter took out the Scrappers at Bernal Tower and Eren Niden hacked a control hub at the Trolley Graveyard to take control of some of the local Scrappers. The Scrapper constructors at Bathhouse was destroyed putting a halt in their replications and several of their units were destroyed to stop them interfering with E-Rep soldier movements. Eren activated the controlled Scrappers for the assault on Dark Matter.

Retrieved from "https://aliens.fandom.com/wiki/Scrapper?oldid=172754"
Community content is available under CC-BY-SA unless otherwise noted.