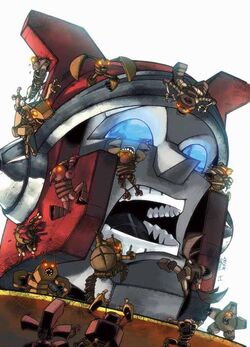 A single Scraplet resembles a tiny robot with biology similar to that of the much larger Cybertronian species. Their appearances varies depending on the continuity or origin.

Scraplets primarily eat metal, including the armor of a Cybertronian. Because of this, Scraplets are considered to be the deadliest disease known to mechanical lifeforms in the entire galaxy.

Scraplets can purposefully attach themselves to mechanical objects as fast as possible, sticking to them like an extremely powerful magnet and melding with them. Once embedded, they are extremely difficult to the point of being entirely impossible to remove.

Much like a Cybertronian, Scraplets can convert themselves into an alternate mode built entirely for camouflage. For Scarplets, it is usually in the form of nuts or bolts.

Scraplets can replicate themselves with incredible speed.

Scraplets can consume mechanical organisms nat by nat until there is nothing left but flimsy, rusty scrap.

Scraplets are vulnerable to being doused in water, which is considered a rare and deadly chemical to them. They can also be killed with cold temperatures.

As seen in Marvel's Generation 1 comics 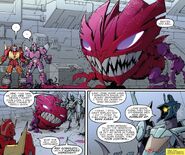 As seen in the IDW Hasbro Universe

As seen in Transformers: Prime

As seen in Decepticon's Storytime Theater - The Story of Stumble Bee

As seen in Transformers: Cyberverse
Community content is available under CC-BY-SA unless otherwise noted.
Advertisement