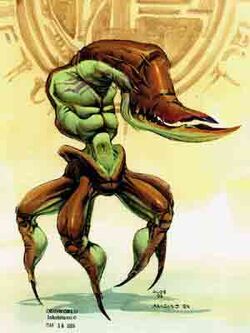 Virtually anything that moves

Scrabs are centauroids with both crab and human-like features: their heads appear to be large claws, they possess humanoid torsos, and their legs, which they use to trample their enemies, are very similar to those of a crab's. Possessing no visible eyes, the scrabs let out shrieks before moving to a new location, which can be assumed to be a form of echolocation. The skin of a scrab is a mixture of red, orange, and yellow tones, owing to the desert climates of Scrabania and parts of Mudos that they inhabit. Their meat is particularly delectable, and they have been nearly hunted to extinction for use in dessert products.

The scrab is extremely territorial: if any other creature enters their domain, they will immediately attack the trespasser. This includes other scrabs, and they will actually ignore all other trespassers just to kill the other scrab in an effort to show their dominance and ferociousness, especially to potential prey. They are particularly vicious creatures, and are well-known to hunt down anything that moves, killing by impaling its prey with its sharp, protruded jaw, then stomping on its prey with its powerful legs until it is dead and suitable for eating.

As a Sacred Animal Edit

Scrabs, like Paramites, are considered sacred beasts by the Mudokons, particularly the Mudanchee tribe. Scrabs can be found guarding Mudokon tombs in the Mudanchee Vaults and Necrum mines. The mark of the Scrab, in the form of a sacred tattoo, is a highly honorable mark obtained by very few Mudokons.

Retrieved from "https://aliens.fandom.com/wiki/Scrab?oldid=180591"
Community content is available under CC-BY-SA unless otherwise noted.