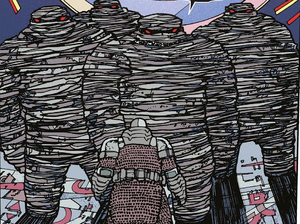 Proteus Vex Universe
The Scorchers are an ancient race of the galaxy.

Unique among the known races, Scorchers evolved inside heir homeworld, close to its core. They are the oldest known race--photovores with an inherent grasp of technology and the ability to directly manipulate energy. The resembling large stone hot giants.

The Scorchers were sought by the Alliance for thousand years ever since the Obdurates declared war. General Netores Edge of the Imperium Ascendant was sent on a diplomatic mission to convince the Scorchers to get involve in the conflict. But the Scorchers declined as it was not their way to involve themselves in the squabbles of lesser races. In order o bring the Scorchers into the war, the Imperium Ascendant's agent Proteus Vex deliberately attacked a Obduarte ship using his vessel the Farrago to attack the Eighth Obdurate Fleet.

After he pierced one of their vessels, the Obdurate fleet went into pursuit. Vex lead them to Rixxot Minor, a small Scorcher colony of at least seventy.

The Alliance had seeded the Rixxot System with comms relays, filling channels with enough chatter and code fragments to convince the Obdurate that they stumbled upon an Alliance military base. So the Obdurates did what they were bred to do and attacked. However what really brought the Scorchers into the war was that Rixxot was more than just a colony but a nursery. Nine Scorchers died on Rixxot, the first deaths to their race in three hundred years.

After the war had ended the Scorcher eventually discovered deception played by the Alliance. They held a grudge against the Imperium Ascendant especially Proteus Vex for his part in bringing war to them. Though in Proteus Vex's defense the action was necessary as the Obdurates would have eventually come for the Scorchers after they wiped away the Alliance. He approached a group on Korregag in the Reactionary core, seeking the missing Chancellor Rho 7 Baryon. Though they could take their revenge on him, he made it a point that Baryon knew most of their dirty secrets and his return to the Imperium was paramount. The Scorchers grudgingly agreed the threat of Baryon lose was greater priority. Knowing that their kind created the tracking technology implanted in Baryon, Vex asked if it was possible for it to be removed. The Scorchers revealed they it was within their ability but they did not have the will to undergo the procedure as the tracking device was within the nervous system of the subject but there was a species who could remove it: the Dahodem. After revealing that a pair of Dahodem were present of Korregag, the Scorchers urged Vex to bring Baryon back to the Imperium Ascendant.

Scorchers are an advanced race that were unaffected by disease or decay with lifespans immeasurable compare to other races until the Obdurate War.

Retrieved from "https://aliens.fandom.com/wiki/Scorcher?oldid=161115"
Community content is available under CC-BY-SA unless otherwise noted.