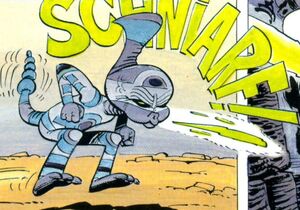 Jean-Claude Mézières
The Schniarfeur, a.k.a. Schniarfer, is a diminutive bipedal creature from the planet Bromn, which is regarded as a living weapon due to its uncontrollable violence and devastating ability to spit a fluid that behaves as a plasma blast.

Members of this species are small, squamous simian-like bipeds with a rattlesnake-like tail, four-fingered hands, three-toed feet and yellow eyes. They have a gland on their heads called the chabounal gland, which is responsible for triggering a state of perpetual hostility that is necessary for survival in their savage and highly-dangerous homeworld of Bromn.

The substance that they spit is solid enough to ricochet several times when it hits solid surfaces, but behaves like an explosive blast once it hits the final target.

Under normal circumstances, a Schniarfeur tends to be extremely agitated, violent, animalistic, crude, mean-spirited and foul-mouthed. When its chabounal gland is pinned, however, it becomes much friendlier and far more articulated.

Retrieved from "https://aliens.fandom.com/wiki/Schniarfeur?oldid=189199"
Community content is available under CC-BY-SA unless otherwise noted.