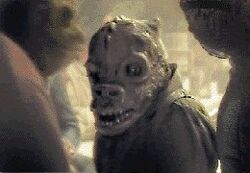 Star Wars
The Saurin are a reptilian species from the planet Durkteel.

Saurin are a subspecies of Trandoshans that evolved along a separate lineage from their ancestors, notably different in their physiology for featuring translucent eyes, and having adapted five-fingered hands, with shorter fingers than their genetic cousins.

It is unknown if Saurins carry the Trandoshan ability to regenerate lost limbs, or held any of the basic beliefs, such as scoring kills to appease the deity The Scorekeeper. Sai'torr Kal Fas and Hrchek Kal Fas were in the cantina. Fikk lived in Lund Gourley. One was on Ryloth. Gauron Nas Tal was part of Jabba's empire. Another Saurin was a member of the Raptors. One was at a casino. Another was attacked by Dianogas. Two were in the streets of Mos Eisley. Rus Kal Kin was part of the rebels. Kroydon was a member of Tonk's crew. Golin was a member of the resistance.