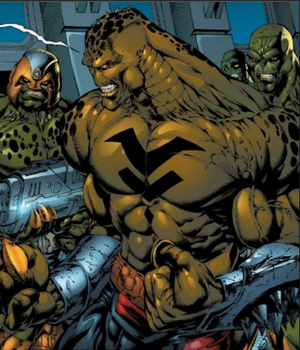 The Saurians are humanoid reptilians that are cold-blooded. According to the Saurians their current form was due to the accumulation of feeding on other intelligent life, such as humans. The Saurians possess the ability to acquire traits from their victims to further enhance their species over generations. The can absorb knowledge of a person by consuming the brain. Their throats contain gill sacs that contain deadly poison that can be spewed at enemies, but can be deadly to the user should it leak.

The Saurians though physically superior to humans suffer from hormonal imbalances, that could worsen due to agitation and scent of blood. This imbalance causes them to go into bloodlust, where the lose rationalization and fall into their primal instincts.

The Saurians are a tribal race, divided into various Houses. They place extremely high value on social caste and lineage.

To counter their primal instincts, many Saurians practice The Forms: martial disciplines that centers on three principles: Focus, Patience and Control.

There are three major deities that the Saurians worship.

Retrieved from "https://aliens.fandom.com/wiki/Saurian_(Sigil)?oldid=193849"
Community content is available under CC-BY-SA unless otherwise noted.