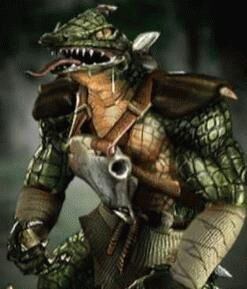 Mortal Kombat
Saurians, also known as the Raptors or the Zaterrians, are a species or reptilian humanoids evolved from dinosaurs, who have evolved a bipedal stance as well as an obviously larger brain than their ancestors.

Due to some unknown evolution (potentially from some form of psychic defense) Saurians seem to be able to alter their form and either appear Human (and likely in the forms of other species as well) as well as becoming invisible. They also possess a powerful corrosive fluid that can easily burn right through steel and certainly through human flesh, in a similar manner to acid, although it apparently is not an acid; Saurians themselves do not have a defense against this weapon, and it can kill them as well.

Before their downfall, Saurians used a matriarchal society that was so important to them that if one were to drift away from the influence of their matriarch or a surrogate they would slowly lose sanity, thereby losing the ability to maintain an alternate form (a heavy indication that the evolution is in fact a mental ability projected into the minds of others).

The Saurians once thrived in Earthrealm, but were eventually driven from their homeworld by a war waged between the Elder Gods, Raiden, and Shinnok. In an attempt to survive extinction, they fled to the realm of Zaterra, where they thrived once more (although in the end this attempt at survival would prove futile). When Shao Kahn, the emperor of Outworld, invaded and merged his realm with that of Zaterra, the Saurians were seemingly driven to extinction. There are only two known survivors of the species: Reptile and Khameleon, although one could assume that Chameleon is one as well considering his similar abilities and name style. 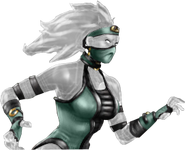 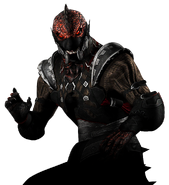 Reptile, the last Saurien
Add a photo to this gallery
Retrieved from "https://aliens.fandom.com/wiki/Saurian_(Mortal_Kombat)?oldid=162306"
Community content is available under CC-BY-SA unless otherwise noted.