Alien Species
Register
Don't have an account?
Sign In
Advertisement
in: All Tomorrows Universe, Bipedal Species, Descendants of Man,
and 6 more 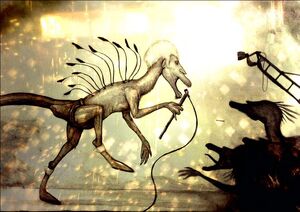 Evolved from the Hedonists

Nemo Ramjet
The Satyriacs were a posthuman species that evolved from the Hedonists.

After millions of years in which the Hedonists lived in constant pleasure, cataclysms shaked their planet and their continent, no bigger than Iceland, was expanded into bigger landmasses roughly the size of Australia. The same cataclysms produced vast amounts of ash which blocked out the sun and led to the decline of most plant life and therefore also most of the Hedonists.

Only a few fast-breeding mutants survived and managed to repopulate the world with many species. One of them were the Satyriacs, sapient creatures which had a "tail" made out of pelvic muscles which gave them an almost dinosaurian stance.

But they also probed into the sky and eventually established contact to other posthuman species, at first the Killer Folk, later the Tool Breeders. Together, they founded the Second Galactic Empire.

Though they were prepared to face an alien invasion, the Empire didn't think about an invasion from other posthumans, and so the Satyriacs, along with all of their cousins, were quickly wiped out by the Gravital as part of their interstellar conquest.