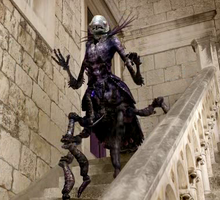 Doctor Who
The natives of the planet Saturnyne are a race of sapient, parasitic ichthyoids (i.e. fish-like creatures) who resemble a cross between fish and large beetles.

They have advanced technology and have close family bonds. They are capable of using terraforming technology, and possess perception filters which alter the brain waves of those who look at them so they think that they see ordinary Humans. However, when only a reflection is seen, the brain doesn't know how to fill the gap and leaves it blank, resulting in no reflections. An effect of the power of the human survival instinct is that the large fangs are still seen, because the brain detects the threat and tries to alert the conscious mind.

The creatures are also able to drain all the fluid out of bodies and replace it with their own blood. This process normally mutates the host over time into one of the creatures.

The last surviving member of the species, which arrived in 18th century Venice, used this method on human girls to allow them to have 'compatible girlfriends', which was vital to their survival. The creatures are harmed by sunlight, and will dry out if they spend to much time on land.

The mother of the survivors had to regularly 'Hydrate' herself to allow her to live on land. Little else is known about how they lived on Saturnyne.

Retrieved from "https://aliens.fandom.com/wiki/Saturnynian?oldid=194938"
Community content is available under CC-BY-SA unless otherwise noted.