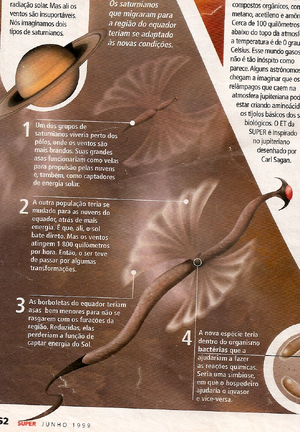 Saturnians are small non-sapient creatures native to the atmosphere of planet Saturn.

Physically, they resemble worms with insect wings. Their bodies seem to be divided in two segments, with the wings sprouting from the middle region between the two. On one end of the body there is a head sporting what appears to be a large red eye or other sensory organ. On the other end there is a thin tail.

There are two kinds of Saturnians living on the planet: the ones living on the poles are shorter and have much larger wings, which are used to capture solar light, in order to get energy. The wings are also used as sails, allowing the animal to be carried around by the winds. The equatorial Saturnians, on the other hand, are longer and have very small wings; otherwise their wings would be torn apart by the strong equatorial hurricanes. They gather most of their energy from symbiotic bacteria living inside their bodies.

Retrieved from "https://aliens.fandom.com/wiki/Saturnian_(Superinteressante)?oldid=166518"
Community content is available under CC-BY-SA unless otherwise noted.