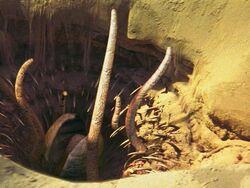 Star Wars
Sarlacci are huge, non-sapient organisms that spend most of their life buried in the ground, with nothing but their mouth - which contains a beaked tongue, sharp teeth and several long, food-grasping tentacles - in view. The origin of this creature is still unknown, but they are currently found on many different planets across the galaxy, including Aargonar, Tatooine, Dathomir and Felucia, among others. They prefer moist environments, although they are perfectly able to survive on desert worlds.

An adult Sarlacc is usually 100 meters long (although some individuals are much larger), but only its mouth appears in the surface, with the enormous body permanently hidden in the underground. Their body is shaped like a sac, where their victims are slowly digested alive for hundreds of years. Sarlaccs also have strong, root-like limbs to anchor themselves and absorb water.

Sarlaccs are omnivorous, eating anything that falls into their mouth. They are able to expel different odors in the air, in order to attract prey. If the Sarlacc isn't able to get enough food, the roots can be used to absorb nutrients and microscopic lifeforms directly from the soil. Since Sarlaccs are mainly immobile as adults, they actually need very little energy, and usually can survive with a restricted food source. Also, they digest prey very slowly. If a Sarlacc is partially exposed (by a sandstorm, or other event) it can rebury itself using its root-like limbs. These limbs are also used to sense vibrations on the soil, which is the how the Sarlacc perceives the world around it, since it lacks any sort of eyes or ears. Small air holes located around the mouth are used for breathing. Gouka Dragons and Greater Krayt Dragons are among the Sarlacc's only known natural predators.

Sarlaccs have a lifespan of tens of thousands of years and reproduce by spores. Their spores are amazing in that they are able to survive in the vacuum of interplanetary space. Because of this, the spores can travel immeasurable distances and the species can easily spread throughout the galaxy. Once the spore finds itself on a habitable world, it attaches itself to a native organism and evolves into a small, blood-sucking parasite. After this parasite stage, it detaches and becomes a mobile, worm-like larva. Young Sarlaccs are active hunters, moving in the underground and searching for prey. As they reach adulthood, however, they grow roots and become sessile.