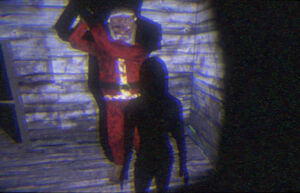 Santa is presumably the only known inhabitant on the Planet FNC-13324 in the 2018 survival horror game: Planet of Bloodthirsty Santa. By the Human's arrival, only Santa exists on the planet as the sole survivor.

As the name implies, Santa's appearance strongly resembles the Christmas character of the same name: a large human-like creature standing at seven to eight feet tall (presumed compared to the humans encountered with him). He wears a red and white suit, stained with blood of previous victims. His eyes seemingly suffer an effect known as Heterochromia - one eye pure white while the other is pure black.

Prior to the arrival of human miners, the previous population of Elves describe Santa as the nicest person in their village.

Overtime, and through unknown reasons, Santa began to become more and more strange in behavior: stalking the local population, and remaining within their village square. Eventually, he began murdering the race, wiping out the entire village in a murderous slaughter. Currently, he has been observed wandering the frozen tundra of the planet and searching for more victims.

His weapon of choice is a large axe.

Retrieved from "https://aliens.fandom.com/wiki/Santa_(Puppet_Combo)?oldid=169619"
Community content is available under CC-BY-SA unless otherwise noted.