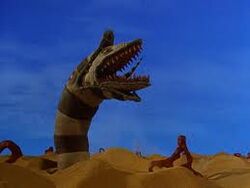 Beetlejuice
Sandworms are a species of worm-like creatures which inhabit a world known as "Saturn", but seemingly located in (or at least accessible from) an afterlife realm.

Sandworms are large predators, looking rather like snakes. Their bodies are lined with vertical stripes. The head has dull red eyes and conical teeth, and houses a smaller head, with a more eyes and an extra mouth.

Sandworms spend most of their time hunting and chasing ghosts caught in limbo. It is unknown whether or not Sandworms are sapient, however they probably aren't due to their behavior. They act in a cartoonish manner when hit, and act a bit like dogs.

The Sandworms live on a world referred to by Betelgeuse as "Saturn". Another name for it is "Sandwormland" in a region of the Neitherworld. It is sort of a "Forbidden Zone". They live in sand their entire lives, occasionally invading other parts of the Neitherworld as well as the Real World. Sandwormland acts as a kind of limbo for deceased people. Sandworms are presumably extradimensional, because of this.

Retrieved from "https://aliens.fandom.com/wiki/Sandworm_(Beetlejuice)?oldid=187592"
Community content is available under CC-BY-SA unless otherwise noted.