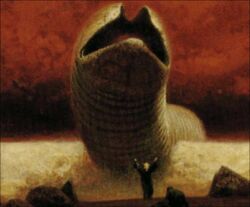 Dune
Sandworms – known by the Fremen as Shai-Hulud and given the scientific name Geonemotodium arraknis[1] – are gigantic annelid-like creatures which dwell underground on planet Arrakis.

These creatures can grow up to 400 meters in length (although much larger individuals have been rumored to exist), and have a three-jawed mouth filled with sharp crystalline teeth. They usually feed on large quantities of sand and sand plankton – which consists of a massive amount of tiny organisms living in the sand, including minuscule larval Sandworms – but will also prey on larger desert creatures. They seem to emit large quantities of chemicals in their breath, described as a "breath of cinnamon, subtle aldehydes ...[and] acids".

Sandworms are described as "incredibly tough" by Liet-Kynes, who further notes that "high voltage electrical shock applied separately to each ring segment" is the only known way to kill and preserve them; atomics are the only explosive powerful enough to kill an entire worm, with conventional explosives being unfeasible as "each ring segment has a life of its own", possessing an independent nervous system. Their skin is immensely thick and covered by scales. They are aggressive, territorial beasts and move around by sensing the vibrations on the ground. However, the Fremen are able to avoid their attentions by stepping irregularly over the desert (to imitate a smaller animal or environmental force), suggesting Sandworms target Humans for consumption. However, people do contain a level of water beyond the preferred tolerances of the worms. They routinely devour melange-harvesting equipment — mistaking the mechanical rhythm for prey — but they only seem to derive actual nutrition from sand plankton and smaller sandworms. Sandworms will not attack sandtrout.

Sandworms can live for thousands of years, and their very static-ness implies a slow metabolism. Their biochemistry is poorly known, though they must respire aerobically, so must be carbon-based life.. What is known is that the chemical reactions going on in the Sandworms' bodies produce enough oxygen to compensate for Arrakis' near lack of flora, and that water is poisonous to the adult worms.

Sandworms begin their long lives as minute larvae living in the sand and which make up the sand plankton. If not eaten by their adult counterparts, they will grow up to the next larval stage, which is known as Sandtrout and resembles a large leech or slug. At this stage, they are able to withstand water, but also consume it, destroying water bodies at an untold rate so that the adult Sandworms will be able to live more safely. A plague of Sandtrouts is able to turn a whole Earth-like planet into a desert planet within a few centuries. Indeed, since Arrakis is known to have had oceans in the past, it has been speculated that Sandworms may not be native to the planet. After centuries, or even millennia, the surviving Sandtrouts will have matured into fully grown Sandworms.

Besides being one of the most important species in the ecology of Arrakis, Sandworms are also important figures in the religion, daily life and economy of the native Fremen, which vaunt Sandworms for the spice they produce, known as Melange. This spice is able to create prescient visions in those who imbibe it, also extending life and countering pathogens.