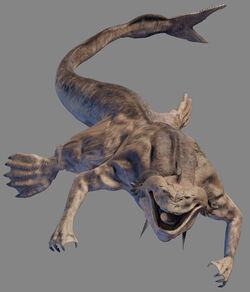 Star Wars
Sando Aqua Monsters are giant predatory creatures found in the oceans of planet Naboo. Reaching up to 200 meters in length, they are the largest known predators on the planet.

Their four, clawed paws and their overall body shape indicates that they evolved from a terrestrial ancestor. In fact, they are distant relatives of the Zalaacas. Sando Aqua Monsters actually might have evolved quite recently, as they still have clawed, paw-like fins, which are used to catch prey. They are able to breathe underwater, though, and they spend up to 90% of their time resting on the seafloor while digesting their meals. Their diet includes Opee Sea Killers and Colo Claw Fish, among others.

During the Invasion of Naboo, a Sando spotted an Opee Sea Killer eating a sub. It licked its teeth with its beige tongue and opened its mouth, letting out a massive roar before it bit down on the opee, missing the sub. The sando munched on the fish as it feebly tried to escape. Having enough of its unwilling prey, the giant monster stood on its legs, gripped the Opee and brutally tore the fish in half and devoured both halves, giving the sub time to flee. But the Sando saw it escaping and pursued it to a cave. In the cave, the sub was being pursued by a Colo Claw Fish, but the sando appeared at the cave beginning to block it. It opened its mouth and let out a low roar, preparing to devour the sub but it went upwards. Then the Sando saw the claw fish attempting to go around it, but the Sando turned the same direction it was going. The monster bit down on Claw Fish, letting out a loud crack. while the sub escaped the sando's appetite, the Claw Fish didn't as it was devoured whole in the monster's powerful jaws.