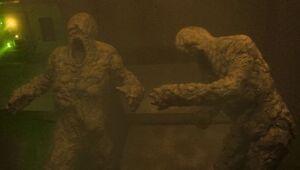 electronic signal effecting the sleep centers of the brain

rapid evolution through electronic signals, absorbs their victims using the sleep dust they are composed of, see by viewing through the sleep dust affected by the Morpheus pods, impervious to bullets

The Sandmen are a form of sentient sleep dust evolved by Morpheus sleep pods in the found footage style episode of Doctor Who "Sleep No More".

In the 38th century, a man named Gagan Rasmussen on the Le Verrier space station orbiting Neptune invented what are known as Morpheus sleep pods, named after the Greek God of Dreams. These pods primary function were to send an electronic signals to certain parts of the brain of whoever was inside of them, specifically the parts intended for sleep. The electronic signals would then change the fundamental chemistry of the sleep centers of the brain to lower the need for sleep. Because of this, the Morpheus pods became a miracle product and was used by people across the colonized planets of the Sol System to stay awake more often. As a novelty, the pods even played the 1954 song "Mr. Sandman" by The Chordettes when putting someone through the Morpheus process. However unbeknownst to Professor Rasmussen and other humans, a side effect from the pods was in effect. The sleep dust (the dust in the corner of peoples eyes after sleeping) was gaining sentience from the electronic signals and began to evolve. Anyone who used the sleep pods began to be devoured by the sleep dust that grew and expand. The sleep dust than began to take a humanoid appearance after they devoured their hosts and began to attack the crew of the Le Verrier station. Later, a rescue team was sent to the station to save any survivors including Professor Rasmussen. While searching the station, they've also ran into The Doctor and his companion Clara Oswald who helped them find Rasmussen. Later after presumably dying at the hands of the Sandmen, it is revealed that Rasmussen survived because the Sandmen wanted to spread and infect more humans by using Rasmussen to release Patient Zero (otherwise known as the supposedly original Sandman who has been under the Morpheus process for five years) from the pod it was held in and send it to colonized planets where it can spread the sentient sleep dust like spores. The Doctor, Clara, and what's left of the rescue crew turned off the gravity shields holding the station's orbit with Neptune and have it fall to the planet while they fled. They also managed to order every Morpheus pod in the Solar System to be dismantled. However, Rasmussen's plan wasn't to use Patient Zero to spread the sleep dust evolution like spores (since that isn't how the Sandmen reproduce), but instead used Patient Zero as a diversion to distract The Doctor and the others to record himself telling everything that has happened. At the end of the recording, he then becomes consumed by the evolving sleep dust in his eyes and states how the electronic signal used in the sleep pods are being transmitted through the same feed as the recording and sends the recording across the Solar System and spread the evolution of the sleep dust to all who watch it. Everything that happens afterward is a mystery with the Sandmen either being stopped by The Doctor before the human race was whipped out or has taken over the entire Solar System.

One particular weakness the Sandmen possess is that they are blind and often have to resort listening closely for sound to hunt humans for consumption. But if a human has been exposed to the electronic signals of the Morpheus pods or if a Sandman managed to leave sleep dust floating in the air or stuck to the side of a wall, the Sandmen are able to see through loose sleep dust with the same level of sentience. They are even able to see through the sleep dust of anyone who has undergone the Morpheus process. The preferred method of consumption for the Sandmen is by absorbing the biological matter of their victims via physical contact with the dust they are composed of. The Sandmen themselves are an ability unto themselves, where the sentient sleep dust is able to move and work together to act as a single entity, however the sleep dust of the Sandmen can break down and fall apart when experiencing extremely strong gravity that pulls the sleep dust downward, such as that of Neptune.

Retrieved from "https://aliens.fandom.com/wiki/Sandman?oldid=189593"
Community content is available under CC-BY-SA unless otherwise noted.