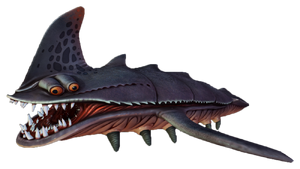 The Sand Shark is a large predator restricted to sandy dunes of deep oceans. The Sand Shark's body is segmented and completely covered with an exoskeleton, having a steel blue upperside and a dull orange underside, with each of the side sporting a large pectoral fin, and ending with a pointy segment. It also has two rows of small feet under its belly. The Sand Shark's head features four yellow eyes, which are divided into sets of two on each side, and a large fin-like protrusion on the top. It has a rather large mouth having six rows of sharp, jagged teeth. A segmented exoskeleton makes this a slow but powerful predator. The rows of feet on the lifeform's underside are ill-designed for ambulation - instead they are used to disturb the surface of the sand so the lifeform can burrow into the ground, from where it may ambush its prey.

The Sand Shark prefers to stay close to the sea floor, rarely wandering near the water surface. As its name implies, the creature tends to burrow into the sand and waits for unsuspecting prey to swim by for an ambush attack. When it does so, sand clouds start to form more and more dense in the surrounding area. Once its prey has approached close enough, the Sand Shark will emerge from the sand and attack. It's large jaws able it to hunt prey twice its own size, but this same technique also serves as a survival strategy to protect it from larger predators that swim the oceans.

Retrieved from "https://aliens.fandom.com/wiki/Sand_Shark?oldid=172751"
Community content is available under CC-BY-SA unless otherwise noted.