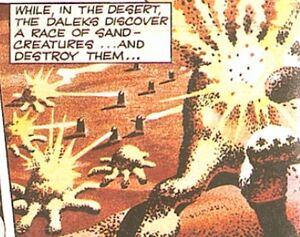 These Sand Creatures are a mysterious species of seemingly amorphous beasts native to the deserts of Skaro, the Daleks' homeworld.

Their bodies seem to be made out of sand and they use numerous pseudopods to crawl over the desert. Their origins are unknown, although they might represent one of the many mutations resulting from the Thousand Year War between the Kaleds and the Thals.

Retrieved from "https://aliens.fandom.com/wiki/Sand_Creature?oldid=150880"
Community content is available under CC-BY-SA unless otherwise noted.