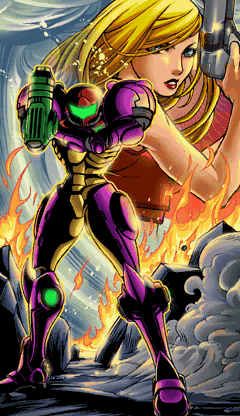 Samus Aran (pronounced "SAM-UHS AH-RUN") is most likely the most powerful Bounty Hunter in the entire Universe. She spends most of her life bounty hunting. Samus has a lifelong vendetta against the Space Pirates because of what they did to her life.

Samus Aran was born on the planet K-2L to Virginia and Rodney Aran, where she lived a happy existence for the first 3 years of her life until her planet was attacked by the Space Pirates. Samus was the only survivor. Samus herself was saved only by her mother, who sacrificed her own life to save her young daughter from Ridley, leader of the Space Pirates, who Samus had attempted to befriend.

She was then found and raised by the Chozo, a race of ancient, bird-like organisms. The Chozo were a race that had at one point ruled most of the galaxy with their advanced technology, although they eventually changed and became attuned with nature and technology. It was the Chozo who then taught Samus in the ways of combat and nature after moving her to their colony world of Zebes. The Chozo are also the ones who gave Samus her famed power suit, which is a modified Chozo battle armor. They gave it to her when she had grown and no longer needed to be raised, she decided to leave and travel through space to get her vengeance on the Space Pirates. Samus would soon return to her home planet to destroy a Space Pirate operation where she first became a thorn in their side, although before this she joined with the Galactic Police Force, and eventually became a Space Hunter.

An interesting function of her power suit is the Morph Ball function. It is called this because of what it does to the body. When the suit enters morph ball mode the suit begins to transform the body completely into energy, thus allowing her to travel through small normally inaccessible places.

While her body is completely energy her mind remains intact, and in a state of complete serenity, free of the fleshy distractions of the body. Many attempts have been made by the Pirates to duplicate this technology, but all attempts have ended in horrific disaster. Perhaps the least morbid way to describe the result is imagining the subject rolling up into a ball so that the forehead touches the throat, then continue rolling even more into a ball. Once completed imagine a watermelon that has had its inside blended into a smoothie. Despite this, Samus is not the only one who uses technology such as the Morph Ball, and many other Space Hunters use similar forms (Known as Alt-Forms.).